skip to main | skip to sidebar

Too pretty to waste

My eyes feel good. Still a little red spot on the one that got injected, but no pain, no scratchy feeling.

I figure, if I AM going to lose my sight eventually, I'd better get out and see and do all I can while I can. (even if I don't ever lose my sight, I should live my life this way) Today was a perfect day...I decided to celebrate and take the kayak out and look at the spring green colors out there. For my first time this year, I decided to stay close to home and went on the East River for a three hour tour......a three hour tour.... It was nice to be on the water again. Some guys fishing near the boat launch even pulled my yak out enough where I didn't have to step in the muck at the edge. A good day.

It seems now that I've started talking about this M.D. thang, everybody and their Grandma seem to have it, and the news doesn't seem to be quite as dire as I first thought it might be. One of my brother's co-workers said she had the same stuff injected for HER eye problem, and it seems to have worked. She hasn't had any shots for a year now and only hasta go in yearly for a checkup.
Posted by coolie at 6:43 PM No comments:

Stick a needle in my eye... 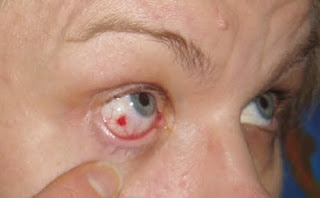 So.....today, I got an injection of Avastin in my eye. They put some antibiotic drops in my eye, dialated it, put numbing drops in my eye a few times (lidocaine), washed my eye with betadyne (stings a little), then put this wire contraption in my eye to hold my eyelids open. Then the doctor put a q-tip in some lidocaine, held it on my eyeball for a second, said "you might feel a little pressure", which I did, but it really wasn't too bad...my eyes did try to blink around that contraption though... Now, 7 hours later, my eye feels like there's sand in it, but that's from the betadyne, they told me. The feeling should go away by morning.

I never realized how crooked my eyebrow is. Hmmmm.

Oh, the cost of the drug? $67 The cost for the doctor to inject it? $2,300. I don't care. I just hope it works. The doctor said I will probably hafta have 2 more injections, (every 6 weeks) then as needed. I'm guessing they'll take another angiogram to check out the progress.
Posted by coolie at 8:10 PM 3 comments:

I recently found out that I have it, and that I will, eventually, lose my central vision. I have since looked at a few books from the library, and posts on-line, saying that I WILL NOT BE BLIND, that I will still have my "peripheral" vision. Well, screw that! It's still blind to me!

I guess right now, I'm in "pissed-off" mode. It's either that or the "crying-mode" or the all time favorite...."scared-shitless" mode.

I don't know if this'll help anyone else, but maybe it'll help me. I want to at least write this down so I can remember things down the road.

Maybe 4 or 5 months ago, I started having a problem reading...couldn't focus on the words. I thought it was because I had switched glasses; I had two pair of the same perscription, but had worn only one of them till I stripped the little screw in the bow and started wearing the other ones. I thought maybe my vision was funny because the new ones maybe sat on my nose differently, altering the angle of my glasses and/or thought maybe I just needed some stronger bifocals. About a month ago, it really started bothering me, things seemed a little dimmer, and I started seeing flashes of light, especially when I blinked my eyes. I made an appointment with my eye doctor. She said she saw some bumpy stuff on my retina which COULD be the start of macular degeneration and referred me to an ophthalmologist; said I should at least have a "baseline" test to compare future tests to. She didn't seem too worried about it, and because she said I should just get this baseline test, I wasn't either.

I went to the ophthalmologist. He dialated my eyes (a freaky thing) and took some extensive tests with bright, bright lights. He said this wasn't too bad, and that wasn't too bad, but there were some little white things in there, and what looked like maybe a blister on my retina, which COULD be the start of macular degeneration, but he didn't sound too worried about it either. He referred me to a retinologist to do even more extensive testing.

I went to the retinologist's office and had my eyes dialated again and this time had a fluorescein angiography, in which a dye was injected into my arm and then pictures were taken of my eyes every ten seconds while the dye was going thru the blood vessels in my eyes. Apparently that told the story. The doctor told me I do, indeed, have it. I have the "dry" macular degeneration in my left eye, and "wet" M.D. in the right. The dry kind is better....still no cure for it, but I will lose my central vision "gradually". The WET kind means there are some abnormal blood vessels underneath my retina that are leaking. Mine is very tiny, but if it were a big bleed, vision loss would be sudden and severe. So.....I have an appointment for tomorrow, to have an injection in my eye! Yikes! He's going to inject a very expensive drug into my eye, which will dissolve the leak, or the blood vessels or something (sorry, I had so much info coming at me, I couldn't retain it all)....anyway, if this injection works, the WET M.D. could go back to the DRY form, giving me some more time.

Time is another thing I'm really not too sure about. What "gradual" central vision loss means exactly....months? Years? DECADES Hopefully??? I'm hoping it'll be long enough where maybe someone will come up with a new treatment that cures it...or at least stops it where it's at.

So, tomorrow I turn 52, and while some people would say they'd rather have a needle stuck into their eye than turn another year older....I'd gladly take the year older part WITHOUT the needle, thanks.